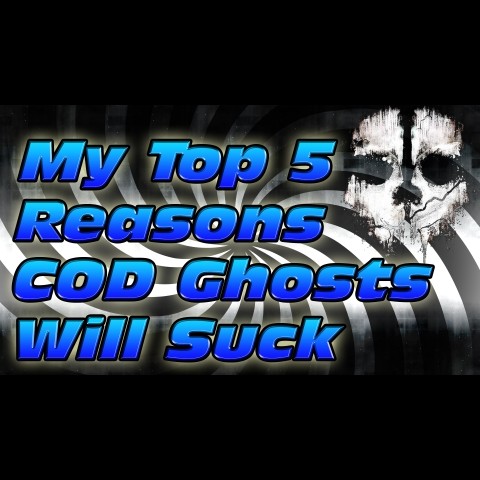 The Call of Duty Ghosts Multiplayer reveal event is happening right now and as per usual the live stream has caused thousands of people to become overtly supportive and excited for it. But before you get too out of control, here is my top 5 reasons that I think Call of Duty Ghosts will suck:

5. An Archaic Matchmaking System That Segments The Playerbase

New gametypes can be a lot of fun. Hardpoint was my favorite gametype in Black Ops 2 & Kill Confirmed was one of my favorites in MW3. But now they have removed hardpoint and CTF from the game, probably to prevent too much player segmenting. The issue with Call of Duty is that they have an archaic matchmaking system that is pairing players up. They need to have a customizable matchmaking system where you select which gametypes you like and which ones you do not and then the game automatically goes out and finds a game which fits your criteria with the best connection to where you are located. This would enable a developer to include as many gametypes as they want in a game without worrying about segmenting the playerbase.

One thing that Infinity Ward should have learned from Modern Warfare 2 is that allowing streaks to stack makes it painfully easy for campers and passive players to earn nukes and high killstreaks. When most people get a nuke they aren’t getting 25 kills in a row. They get 7 kills in a row (6 with hardline) and call in their Harrier Strike. Their Harrier then gets 4 kills for a Chopper Gunner or AC-130 and then that takes them all the way to their nuke or very close to it. You add that in addition to streaks that cycle automatically and you end up with Black Ops 2, where players can run VSAT/Dogs/Swarm and cycle their streaks for the entire game. Ever wondered why so many people quit out of games? Perhaps it’s because players don’t like to respawn into a game where a bunch of drones, lodestars, warships, dogs and players are waiting for them.

Infinity Ward knows how much the community loves Commando knifing from MW2, so they brought it back, this time with a Juggernaut suit! You thought players knifing you while running through a stream of your bullets was annoying? Wait until you see one of these hulk-o-maniacs running at you. Infinity Ward also remembers how much the community loves explosives like One Man Army Danger Close & Dead Man’s Hand. So they’ve arranged a plethora of new bullshit ways that you can die before ever seeing your opponent. The key to putting something in an Infinity Ward game is to make it as easy as possible for bad players to get a kill with it.

Usually the announcement that the game will include dozens of new weapons, perks & killstreaks would be a good thing. The issue is that we are talking about Infinity Ward here. This is the same company that brought us Akimbo 1887’s & FNG-9’s. The same company who brought us One Man Army Danger Close Noob Tubes The same company who brought us Marathon, Lightweight, Commando Knife Lunges. The same company that brought us deathstreaks like Painkiller & Deadman’s Hand. This developer is famous for overlooking extremely overpowered bullshit in this game and they have a history of never fixing it once it has been included in the game. Put simply, the more stuff that gets put into the game the more likely it is that the game is unbalanced.

But watching the Multiplayer trailer at least I can take comfort in the fact that the developers and I agree with at least one thing about Call of Duty. It’s always the bitches using sniper rifles and destructible environments to get kills.