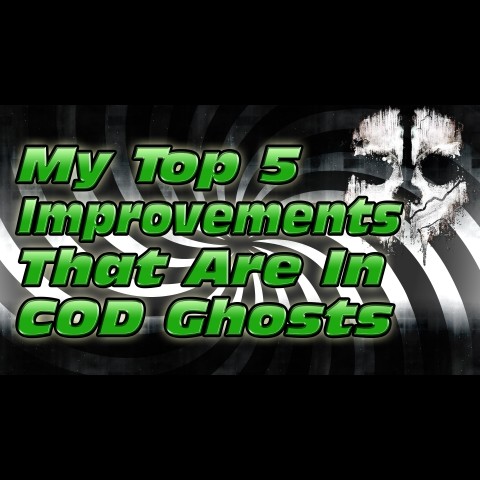 Yesterday I posted 5 reasons Call of Duty Ghosts will suck. Now I didn’t post that because I literally think Ghosts is going to be a bad game. I’ve been a fan of Call of Duty since Modern Warfare 1. I love Call of Duty games. So much so that I created an entire Youtube channel & website based around the series. I am excited for Ghosts to come out, but just because I am a fan of the series and am passionate about the game does not mean that I agree with everything the developers do with it. It’s quite the opposite actually. Because I am so passionate about Call of Duty I want it to be the best game it can possibly be. I want it to be game of the year. I want it to be innovative and progressive. So when I see them make blatant mistakes with the game year after year it worries me.

As a consumer there are really only two ways you can voice your opinion about changes that should be made to a product. 1. Don’t buy the product. If enough people don’t buy something it informs the producer that they need to improve their product in order to keep their customers. 2. Voice your opinion and gather support for your opinion and create a movement to get something changed. That’s what I’m doing. I think Call of Duty is a great franchise. I don’t think any of the COD games are terrible, but I do think they could be a lot better. Which is what that video was about.

Now let’s get onto the top 5 improvements I feel they are bringing to Call of Duty Ghosts:

Customizable characters is something that I’ve wanted in Call of Duty since they had face paint in Black Ops 1. Customizable characters, weapon camo’s & player emblems are a great way to increase player satisfaction. Being able to customize the way your character looks creates a new level of personalization to the game. You can make your character look however you want. As a side note, creating rare customizable items is a great way to transition Call of Duty into a Free to Play model, which I will cover at some other point.

4. Unlock items in any order.

I loved the cash unlock system in Black Ops 1. Players shouldn’t be forced to reach a certain level to unlock items that they want. They should be able to earn unlocks and unlock weapons, perks or equipment in any order that they want.

Allocating a set worth for each item in the create a class system is very important to achieving balance within the game. The biggest issue with the pick 10 system of Black Ops 2 is that not all items and perks are created equal. There are clearly weapons, perks and equipment that are superior to others which is why some items were used far more often than others. By allocating a set number of points for each item, it’s much easier to maintain balance within the game because you can increase or decrease the cost to equip an item and effectively nerf or buff it.

The new movement system, if it is implemented well, is a great improvement to the Call of Duty series. Leaning, Mantling & Sliding are all ways to immerse the player into the game. A game’s interface shouldn’t interrupt your experience. How many times have you been playing COD and you try to jump over something only to get stuck in that clunky climb animation and die? It happens to me all the time. Your movement should feel fluid and respond how you want it to. Want to slide into cover? Now you can. Want to peak around a corner before going all out? Now you can. Want to mantle the object in your way without getting stuck into some goofy climb animation? Now you can. Brink had a SMART movement system that was similar to this and I loved it, but it was buggy and the game had many flaws so not many people know about it. As long as the developers can implement this new movement system well and it’s not glitchy and it adds rather than detracts from your experience I think this will be a great improvement.

I truly hope that the improvements in Call of Duty Ghosts outweigh any dislikes I have about the game and that it is an exciting and enjoyable game.